You Deserve to Be Here.

You deserve to be here

At Portland State University, I teach a year-long course called ‘Portland’ in our general education program. Different instructors teach this course on the history, geography, culture and politics of Portland in many ways; this fall, my class focused on local elections: city, county, metro (our regional government) and state level politics.

When planning the course over the summer, I made the conscious decision not to take on federal elections, both because there was already a lot to cover, and also because – if students paid attention to the press at all – they were saturated with the national stories. Furthermore, the presidential race was taking a turn for the worse. The primary debates had been ugly; Trump was already on the radio saying terrible things about Mexican immigrants, Muslims, and a host of other groups; the tone had become childish and rude. When classes began, my decision was reaffirmed: I was not at all interested in making room for the racist voices of the Trump line, nor letting any student be abused by that rhetoric in a setting that I would facilitate.

So: local politics. A lot of our time was spent on basic civics – different levels of government, who is responsible for what, how resources get allocated – a topic in which many of my students were sorely uninformed, whether they had attended Oregon (or other American) public schools or been educated abroad. We had visits from the two candidates for a hotly contested Portland City Council seat. We visited the local elections commission to see where and how ballots get counted. We examined state house races. It was great.

Or, mostly great. At times, I became frustrated with what I took as students’ indifference to the political process. I wanted them to become passionate about the potential of local politics to enact real change; instead, many asked questions about “if spelling counts” on their papers. Why weren’t they invested in the races in their state legislative districts? Why didn’t they come to class fired up about Portland’s weak homeless policy? Why didn’t they read the news? And then, of course, I had to face the fact that most had never been rewarded for self-motivation or analyses of power in their education – why would they start now, with me, in their first-ever term of college, while a chemistry midterm loomed?

And in the face of all that, we did learn. On good days, we even talked about democracy.

On Tuesday, November 8, I brought in a cake! “Happy Election Day!” it declared, in orange icing on chocolate, with a chocolate donkey and an elephant standing atop. I wanted my students to regard this as a joyous day for celebrating democracy, and the right to vote. My TA took a photo of me in a professorial blazer, smiling proudly. 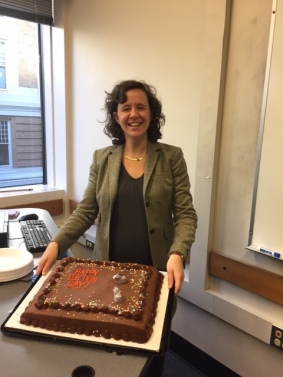 We all ate cake together, as we watched the videos students had made in small groups in order to teach one another about local ballot initiatives. I encouraged them to watch the returns that night, and happily dismissed them.

We all know now how the evening went.

And now Trump. And now the rise in hate crimes. And now it is Wednesday, November 9 and I am in my office, fuzzy headed, counting my students from the roll call: at least 2/3 of them foreign or immigrant or Latino or Muslim or Jewish or Queer or People of Color or women or with a disability.

And suddenly, I wondered: what had I done? Had I been so blind to the possible outcomes, so grumpy about the terms of the political debate that I had ignored the fact that many of these students were being derided and threatened all term? Had I been complicit as the media covered the candidates as if this were normal? Had I acted ethically as I set aside national politics while this was unfolding?

I felt sheepish about only covering local elections. I felt anxious. I felt scared of backlash. And I felt confused, knowing I had no idea what my students’ opinions actually were on politics, having made very little space for them to hash it out publicly in order to protect me from them, them from me, and them from one another.

So we had class, and there was plenty to keep us busy. We had to watch the rest of the ballot initiative videos, and talk about how videos work as political communication, and answer questions about the upcoming assignment (letters to our elected officials!) We also went through results of the local ballot, and they understood it! Many even knew the results!! And suddenly I didn’t feel sheepish anymore – in fact, I felt proud of what we had covered and learned in the local races.

But then, with only five minutes of class left, I knew I had to say something before I sent out these young people – many of whom had just voted in their first-ever elections – into a world that was, for many of them, far more dangerous than it had been the day before.

We just got back the results of a presidential election that was surprising to many of us, and in which many of us are disappointed. I have not talked about the national elections in this class, partially because we have been busy with other things, and partially because I wanted everyone to have their own political opinions without being forced to express or defend them, and without imposing my views.

But now that Trump has been elected, I will say something because this campaign has been extremely divisive. The Trump campaign, especially, has said a lot of things that were insulting to people in this room. So first: if you are feeling sad or scared, you can come to me or email me, or go to any of the resource centers on campus. But even more than that, I want you all to know that you deserve to be here:

If you are foreign, you deserve to be here.

If you are an immigrant, you deserve to be here.

If you are Latino, or Mexican, you deserve to be here.

If you are Muslim or Jewish, you deserve to be here.

If you are Queer, you deserve to be here.

If you are disabled, you deserve to be here.

If you are Black or Brown, you deserve to be here.

If you are a woman, you deserve to be here.

We all deserve to be here.

That is what it is to live in the United States.

That’s all I got. Class dismissed.